Famous In Love Wikia
Register
Don't have an account?
Sign In
Advertisement
in: Article stubs, Females, Characters,
and 3 more

Tangey Turner is a main character on Famous in Love. She is portrayed by Pepi Sonuga.

Tangey is a pop star with a controlling mother who was previously romantically connected with both Jordan Wilder and Rainer Devon, one of them as a love affair, which caused lots of drama and tension.

Tangey Turner is a famous pop star with a controlling mother, Ida Turner.

We first learn about Tangey when we hear that she dated Rainer Devon, but was frustrated as she believed that Rainer was not fully committed. She then had a love affair with Jordan Wilder, which caused a great divide between the two former best friends, Rainer and Jordan.

As time passed, Rainer grew to accept what had happened and move on, and gave Jordan the OK to persue whatever chemistry he had with Tangey, creating a successful relationship for them.

Tangey has a very complicated life as a singer, and has many conflicts with her "momager". Her mother controlled every aspect of her career, every song, and never had anything to give her but criticism. Tangey grew tired of these routines and wanted to try something new by performing a country song, without the approval of her mother. This caused Ida to become furious and demand that she revert to her old ways, so Tangey told her off and fired her mother as her manager.

Tangey's acting career failed when she was fired from Locked because her character was re-cast. This caused a lot of drama with the press and her fans, who assumed the worst. Her singing career also took a turn for the worst, and her fans doubted her choice to sing country.

Tangey soon realized she was not able to keep up with the expectations without a real manager, and no agent understood her career like her mother did, putting her in a very compromising and stressful situation.

She soon allowed her mother to help with her career again, getting her role back on Locked as Leila.

Tangey has an average-to-short height with a petite frame. She has dark eyes and eyebrows, a straight nose and full lips. She has a light caramel complexion, and her long, black hair is beautiful and curly. 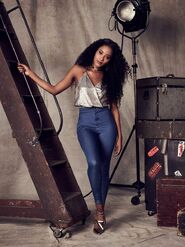 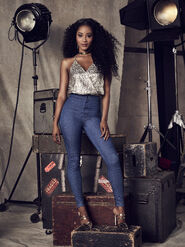