View source
watch 01:36
We're Getting Mutants in the MCU - The Loop
Do you like this video?
Play Sound

Georgie Flores is an actress, best known for portraying Cassandra Perkins on Famous In Love.

Gerogie Flores moved to LA when she was 18 with her best friend and her family, and similar to Cassandra's storyline, Georgie's best friend was an actress and model at the time, and she booked her first audition. [2]

Georgie has known Carter Jenkins for years. They first met at a Warner Bros audition in 2011, and neither of them got the role. "He's like a brother [to me]".[3]

Newcomer Georgie Flores got her acting start on the CSI franchise, appearing in “CSI: NY,” “CSI: Crime Scene Investigation” and “CSI: Miami.” She also appeared on “Big Time Rush” and the short film “Sam,” before landing the role of Cassandra on Freeform’s “Famous in Love.”

When Georgie finished filming, she said she felt "numb". "My cast mates and I are in a group chat and they're like, oh my god." Georgie feels like her life is on pause, and most of the time forgets that this "exciting thing" is about to happen, and continues to live daily life.

Georgie describes her time acting with Bella Thorne and Charlie DePew as "very fun and easy". "Bella's really awesome, she treats everybody with the same level of respect and the same amount of enthusiasm, whether you're an extra or you're crew, or you're her cast member, or you're the director, or producer. So it was not hard at all for us to play best friends." As for Charlie DePew, she gushes on how much she loves him. "He's so sweet." 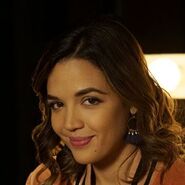 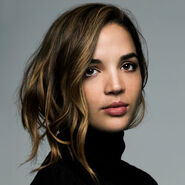